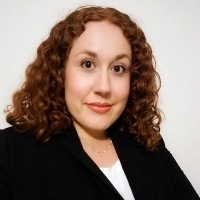 Prior to joining the College of Law, she worked as a managing attorney for the Law Office of Steven R. Espinoza, where she represented hundreds of individuals before the Department of Homeland Security, Immigration Courts, and the Board of Immigration Appeals in various types of immigration matters, including applications for asylum, Cancellation of Removal, VAWA, U‐visas, and DACA. She also represented non-citizens in their requests for post-conviction relief in criminal court.

While in law school, Professor Rodriguez‐Campos externed as a student legal representative in the Justice and Immigration Clinic, successfully representing a Central American man in a defensive asylum case. She also clerked for the Children Rights’ Project at Public Counsel, serving in the In Pro Per Guardianship Clinic and assisting in Special Immigrant Juvenile Status cases. She was a recipient of the Joe Baca Foundation scholarship, the Segal AmeriCorps Education Award, and the Best Brief for Appellee Award in Appellate Advocacy.

She is a graduate of the University of California, Los Angeles and the University of La Verne College of Law. She has Bachelors of Arts Degrees in both English and Spanish. She has appeared on Univision as an invited commentator on immigration topics and is the proud daughter of immigrant parents.