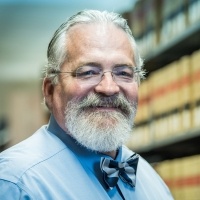 Kevin S. Marshall is the Frank Lizarraga Endowed Dean of the College of Law. In addition, he teaches contracts, sales, remedies, corporate finance, nonprofit law and governance, and law & economics. Marshall also serves as a lecturer at the University of La Verne College of Business and Public Management, where he teaches courses in economics, finance, public policy, and quantitative and qualitative research techniques.

He received the degree of bachelor of arts, cum laude, Phi Beta Kappa, with a major in economics from Knox College in May 1982, and was conferred the degree of Juris Doctorate from Emory University in May 1985. Marshall practiced law in Dallas, Texas for approximately 20 years in the areas of state/federal civil procedure and commercial litigation, as well as domestic and international competition law. In May 1991, he received the degree of Master of Public Affairs from the University of Texas at Dallas. Upon completion of his doctoral dissertation titled Administered Protection: The Political Economy of U.S. Countervailing and Antidumping Laws, Marshall was awarded a PhD in political economy from the University of Texas, Dallas in December of 1993.

Marshall is certified in Quantitative Methods and Economic Analysis by the University of Texas at Dallas’ School of Social Sciences for his academic achievement and coursework in descriptive and inferential statistics, costs-benefits analysis, social science research methods, regression analysis, advanced regression analysis, and econometrics. Marshall is also a practicing economist and has served throughout the past 20 years as a consulting and testifying economic expert in state and federal courts throughout the United States with respect to cases involving economic issues in Robinson-Patman, antitrust, misappropriation of trade secrets, commercial, breach of contract, class-action fairness hearings, wrongful termination, employment discrimination, personal injury, and wrongful death.

Marshall has published and presented numerous books and articles involving the interdisciplinary workings of law and economics. His published work has been cited by both state and federal appellate courts, as well as by numerous other published works and secondary sources.

Professional Organizations, Activities, and Honors (Past and Present)