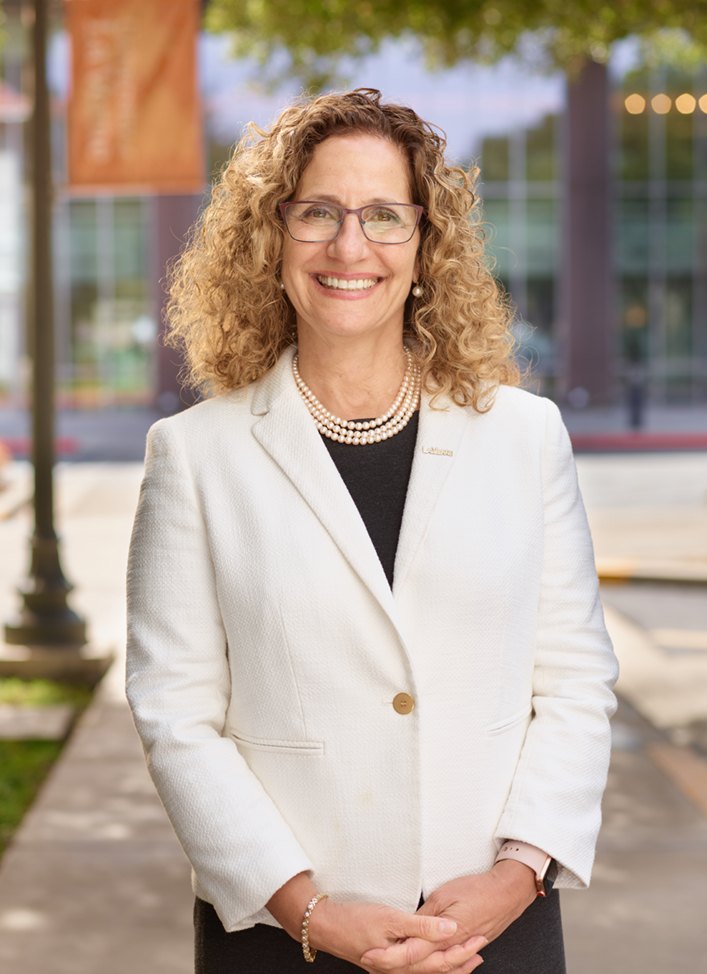 Dr. Devorah Lieberman, the University of La Verne’s 18th and first female president, brings more than three decades of higher education experience, scholarship, and leadership to the institution. Since taking office in 2011, she has contributed to the well-being of the university’s students, the scholarly activity of the faculty, and the vitality of the surrounding community while also advocating for engagement, inclusivity, and respect among all. She has dedicated her career to advancing three values: educating and cultivating future leaders, promoting inclusivity and diversity, and leading by example with integrity.

Among Lieberman’s accomplishments are raising $128 million in the largest comprehensive campaign in the university’s history; significantly increasing funding for student scholarships; expanding the international student population; increasing the number of named colleges, endowed deans, and endowed faculty positions; and, significantly increasing the institutional endowment from $36 million to $151 million. Currently, she is leading the university’s establishment of a College Health and Community Well Being to help address the region’s critical need for healthcare professionals.

Additionally, Lieberman is leading the university’s efforts to better serve underrepresented, low-income, and first-generation students. As a federally designated Hispanic Serving Institution, the University of La Verne’s student body reflects the demographic and socio-economic diversity of Southern California. In 2021, she was named to the board of the Hispanic Association of Colleges and Universities (HACU).

Throughout her career, Lieberman has brought national recognition to the institutions with which she has been associated. This includes receiving the American Council of Education (ACE) Bringing the World into the Classroom award, the Washington Center Higher Education Civic Engagement Award, and the TIAA-CREF Theodore M. Hesburgh Award for Excellence.

Lieberman was named President of the Year in 2015 by the Association of College Unions International for supporting an inclusive and engaged campus community. She was one of 13 national scholars invited to participate in the Project on the Future of Higher Education; was named the 2000 Oregon Professor of the Year by the Carnegie Foundation for the Advancement of Teaching; and received the 1999 Distinguished Faculty Award from the Portland State Alumni Association. While chairing the statewide Board of Directors for the Oregon Council for Hispanic Advancement, Lieberman received its 1995 Si Se Puede Award and its 1998 Amistad Award, as well as the 2003 Las Mujeres de la Raza Award from the Portland State students and the City of Portland. The San Gabriel Valley Economic Partnership in 2021 named her CEO/President of the Year.

In 2015, she was awarded the NECO Ellis Island Medal of Honor. In 2020, Lieberman was appointed honorary senior advisory panelist at the Hague Institute for Global Justice, an independent, non-profit organization based in the Netherlands that aims to shape discourse and bridge gaps between research, policy, and practice on global issues at the critical intersection of peace, security, and justice.

Lieberman is currently chair of New American Colleges & Universities (NAC&U) and past president of the executive committee of the Coalition of Urban and Metropolitan Universities. She serves on the boards of the Association of Independent California Colleges and Universities (AICCU), Casa Colina Centers for Rehabilitation, La Plaza de Cultura y Artes, the L.A. County Fair Board, and the L.A. Chamber of Commerce. She is on the Executive Committee of the International Association of University Presidents.

Lieberman’s expertise includes intercultural communication and diversity issues in higher education. She has published and co-authored dozens of books and articles relating to diversity, institutional transformation, and issues affecting higher education. They include “Successful Models and Practices” in the 2012 edition of Transforming Undergraduate Education: Theory that Compels and Practices that Succeed, and “Engaging a campus in effective intercultural and interracial communication initiatives” in Coming in from the Margins: Faculty Development’s Emerging Organizational Development Role in Institutional Change (2011).

From 2004 to 2011, Lieberman served as provost and vice president for Academic Affairs at Wagner College in New York. There, she led the strategic development of Civic Innovations, a multi-year effort that served to connect students with community engagement activities.