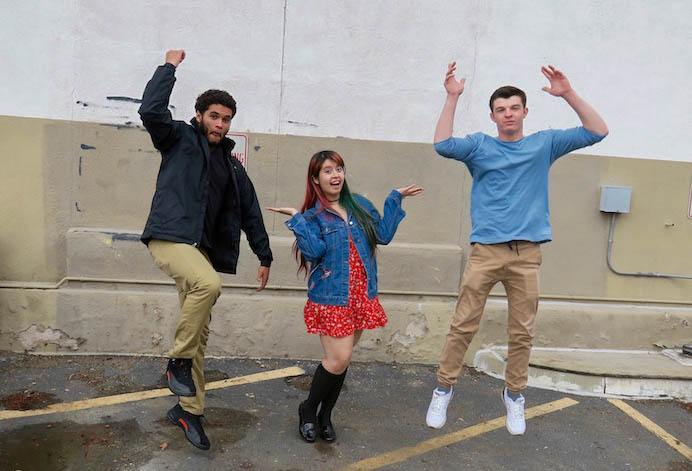 Student filmmakers in the Communications Department at the University of La Verne won for Best Narrative Film – Short or Feature, at the Alliance for Community Media WAVE Awards held on Feb. 1 at the Maya Hotel in Long Beach.

Savannah Henry, ’19, wrote and directed the award-winning short, AVA that captures a futuristic tale where people communicate non-verbally. The film was produced by Andrea Leiva, ’18, filmed by Tina Sanchez, ’18, edited by Flo Schinoff, ’19, and designed by Jaqueline Hall, ‘18.

“It is always a wonderful experience when our students get recognized for their creativity and hard work,” said Don Pollock, professor of communications. “Our broadcast program is small but mighty.”

The Alliance for Community Media is a national network of affiliate TV stations, radio stations, and public access advocates whose mission is to promote free speech and greater civic engagement through community media.

Over the years, students in the Communications Department have received honors from The Hometown Media Awards, Telly Awards, Society of Professional Journalists, College Broadcasters, Inc., The Accolade, and the Broadcast Education Association.

Students in the broadcast program at the University of La Verne are trained in all aspects of filmmaking, including producing, directing, writing, editing, and audio. They are also cross-trained in radio, which improves audio and performance skills.

Many graduates of the Communications Department work in film and television. Approximately six graduates have gone on to win Emmy Awards.

Photo caption: Students Tre Pogue, ’19, Jessica Bi, ’20, and Nathan Keeler, ’20,  jump in excitement after their PSA, Phone Zombie, placed as a finalist during the 2019 WAVE Awards.