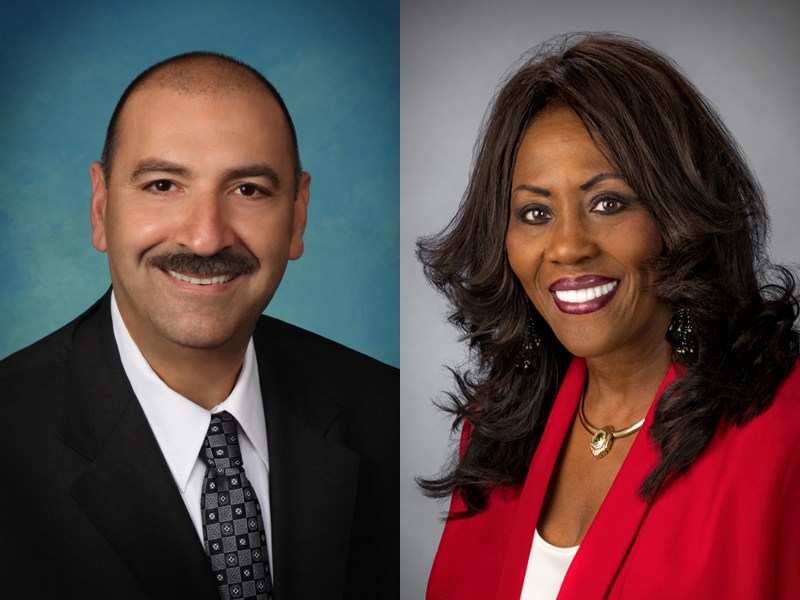 Two pioneering leaders are joining the University of La Verne’s Board of Trustees this fall.

“I am thrilled that Martha and John are joining our board,” said University President Devorah Lieberman. “They are loyal University of La Verne alumni, and longtime supporters of the university. I am looking forward to their leadership.”

Raffoul and Daniel were unanimously voted onto the Board of Trustees at its annual board meeting May 31.

John Raffoul earned his Doctor in Public Administration from the University of La Verne in 2002. He was named president of Adventist Health in 2015, and he oversees the 353-bed teaching hospital that serves more than 245,000 patients annually.

Raffoul began his career at Adventist Health, then known as White Memorial, in 1984 as an accountant. Over several decades, he advanced to chief financial officer, chief operating officer, and executive vice president. Raffoul spearheaded the development of the medical center’s code of business ethics and guiding principles. He oversaw the $250 million construction project to rebuild the medical center for seismic upgrades and campus development. Raffoul works closely with caregivers, physicians, patients, and community partners that support a healthful work environment to better serve the needs of the community. In 2016 and 2017, Adventist Health was recognized by Healthgrades as one of the top 100 hospitals in the nation.

Martha Daniel, an expert in cybersecurity, engineering services, and network security, is a longtime supporter of University of La Verne. She currently presides over companies that provide network security and asset management to clients from around the globe. Her companies employ more than 150 professionals, and manage $300 million in data center operations. Clients include the United States Navy, Army, and Air Force as well as Fortune 500 companies, including Wells Fargo and IBM. Prior to launching her companies, Daniel was chief information officer at FDIC/Resolution Trust Corp. and a senior systems engineer at IBM. She also served as a cryptologist in the US Navy. An authority on cybersecurity, Daniel is regularly quoted in the media, and has written for The White House Blog. She is a co-author of Million Dollar Conversations and The Other Side of Midnight, 2000, and was selected as a study group member for the National Infrastructure Advisory Council’s (NIAC) Water Sector Resilience Final Report and Recommendations.

Daniel earned her Master of Business Administration from University of La Verne in 1984. In January 2018, she served as commencement speaker at the university’s College of Business and Public Management.

Daniel said she is honored to serve on University of La Verne’s Board of Trustees.

“The university is committed to its students and providing a top-notch education to a broad population of students,” she said. “I am looking forward to help lead the university into the next decade and beyond.”